Travel In Rome with Foursquare

Okay, the title of the post is a leeetle misleading… because last week I wasn’t so much traveling in Rome with Foursquare as actually in Rome, with the co-founder of Foursquare. Yup, yours truly got sent for work to an event held at Telecom headquarters called World Wide Apps at which Naveen Selvadurai was a speaker, and afterwards I interviewed him – on video (below). And since I wanted to become a Foursquare super user overnight, I checked in everywhere and I did what I could to discover the social and travel potential of this app in Rome.

Foursquare – as Naveen emphasized a few times – started with the idea of travel in mind. He and his friend like to travel and discover new places, even in their own city. Foursquare allows you to share this experience with friends when you check in to places, receive and give tips about the places you discover, and collect points and badges as you go. If you check into a given location a certain number of times, you become “mayor” unless there is someone who goes there even more often, and this plays into game theory and encourages us to check in more often. Although Foursquare is really quite new in Italy – there are nowhere near the number of users that there are in the States – most of the salient points have been added in the system, at least for major cities. And if the point you want isn’t there, of course you can add it (like I added our beach establishment in Maremma). 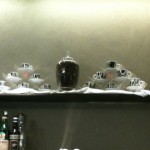 In Rome, for the first time I experienced two features of Foursquare – the social aspect and the travel tips feature. First, the social. A Roman colleague and I checked in to a bar (Andreotti – very good) near the event, after a few minutes a guy walks in and says “Giorgio!! I saw you were here and so came in to say hi!”. On foursquare you “friend” people and can see if they’ve checked in nearby, so if the area is sufficiently concentrated with Foursquare users, you might enjoy social moments like this. If this seems as creepy to you as it does to me, two solutions – don’t check in everywhere (and never at your own home), and don’t accept friendships from strangers. Common logic. 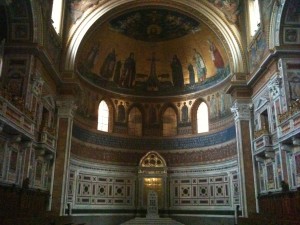 The seat of the Pope at San Giovanni in Laterano

Rather later that night I checked in (on Foursquare and at a real reception desk) at the hotel that I’d chosen online without much forethought and I noticed a tip from another user who suggested visiting the Archbasilica of San Giovanni in Laterano which turned out to be just 400 meters away. Well, how could I NOT!! Had I not looked on Foursquare, I might have missed the opportunity to see this important church that is the cathedral of Rome and the seat of the Popes (there’s even a marble pope-throne in there, although it’s just a copy now). So I made sure to get up an hour earlier in order to visit the church before catching my train out.

As you know, Foursquare awards badges when you complete certain tasks, and at the World Wide Apps conference, enough geeks checked in in one place to receive the much coveted Swarm Badge!!

The video interview was for our client Impresa Semplice, the cell phone service for small businesses offered by Tim. So the questions that my colleague Giorgio wrote were aimed at informing small business owners how Foursquare could benefit their business.