Mugello day trip: cows, a pieve, a convent, tortelli, and an outlet mall

On the spur of the moment we headed out one strangely cool August day to take in some of what Mugello has to offer. I think this will be the first of many such trips as there is a lot to see. The following is an itinerary with an excellent local lunch spot, an outlet mall, a convent, and the Medici villa of Cafaggiolo.

Two old roads lead into this area and are fun to drive, with great scenery. We took the Faentina on the way out – you guessed it, this road goes all the way to Faenza via the mountain pass at Marradi. There is some good landscape to be photographed off to the side of the road. 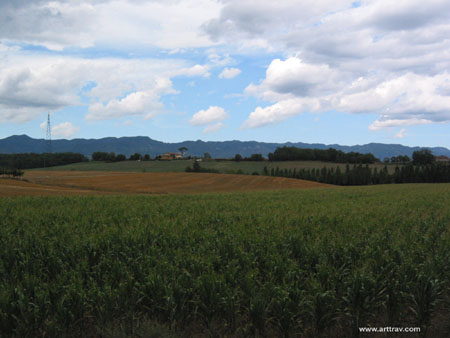 The first goal of this trip, since we started out late, was to get to Trattoria da Giorgione for lunch, in Localita’ Sagginale, not far from Vicchio (sorry, hunger made me forget to photograph this event). This casual and inexpensive trattoria with outdoor seating is renowned for its Tortelli Muggellani – potato filled ravioli served with your choice of sauces, including duck which is apparently delicious. I had ravioli with ricotta and spinach. The service isn’t great, the clientele can be rowdy, but you can’t beat the down-home local cooking. Giorgione himself calculates your bill in lira – the prices haven’t changed – and converts it to euros. A hearty lunch for two cost 22 euros. He told us that he hated to see us spend so much, and said that he just opened a bar a few steps away where they serve primi with no cover charge. Good to know if the restaurant is ever full.

About 2-3 km before reaching Sagginale we followed a brown sign for a Pieve off the main road, called San Cresci in Valcava (?). This took us onto a very narrow, curvy and at times precipitous road (with some very pretty cows at the side). We followed this road blindly until we saw this nice Romanesque pieve looming above us. There was nobody around and there was a most absolute silence, broken only by the sound of a rooster (see video here of pieve). The door was slightly open so we wandered in. The building was almost destoyed by an earthquake in the 19-teens so is highly restored, and the inside contains no frescoes or old art. The belltower, however, remained standing. 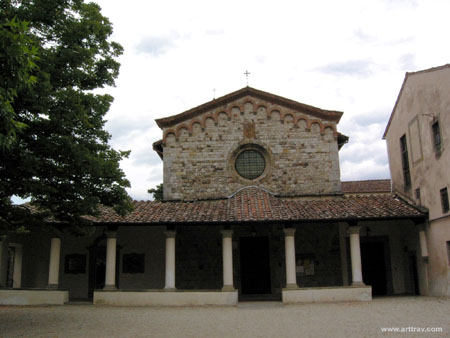 From Sagginale take the road back towards Borgo san Lorenzo (a town with a not very exciting historical centre). Just after the town, we took the road to San Piero a Sieve in search of the Convent of Bosco ai Frati. At the first intersection take a right, and there is a small rusty sign pointing left that says “Bosco ai Frati”. This took us down a small residential street which ended at a larger highway at which point there was no indication. We discovered by trial and error that at this point we should have turned LEFT, then right at the first intersection off this larger road. I believe there was a brown sign there. If you get lost, ask the locals. At the corner I photographed the field of grain and the sunflowers with purple wildflowers; further up I got the shot of the sunflowers against the rapidly clouding over sky. The road to this convent is well paved though wide enough only for one car – despite being actually two-way. After a few km’s it’s on the left.

This convent was founded by the Ubaldini family – rulers of Tuscany – some time before the year 1000. In the 15th century both church and convent were restored with funding from Cosimo de’ Medici, whose villa at Cafaggiolo is not too far away from here by modern roads. The convent belongs to the Observant Franciscans and is greatly valued by the citizens of the Mugello, but is otherwise isolated and unknown to most. In part this lack of tourism is because the convent does not have traditional opening hours. If you knock and the friar has time, he might be able to take you around. You can call to make an appointment in advance. We were lucky that the friar was willing to take time out from his work to show us the convent’s treasures and tell us stories. Notice that i refer to the friar in the singular – he presently makes up the entire community, though there may be plans to lend out the space to another group in the future. To have this friar show us his home was a marvellous treat, not only because we had no idea what great things this place had to offer.

The Convent has a rich artistic and architectural history, in great part due to the Medici patronage of the mid-15th century. The rennovation was carried out by their architect, Michelozzo. You might notice the not coincidental patronage of observant communities by Cosimo (this and San Marco) and the use of Michelozzo for their rennovations. The single-naved church has a circular choir, and houses a few quattrocento altarpieces. On the high altar there used to be a painting by Fra Angelico now in the Museum at San Marco. Above the choir was a wooden crucifix by Donatello, which was removed at some point, and rediscovered in storage. Now a wooden architectural element from the 18th century divides the nave from the choir; the latter is accessed through doors on either side. To one side is the sacristy with 15th and 17th century woodwork. A small museum with a good security system houses the crucifix which was found in storage, restored and attributed to Donatello. The wood carving is of the highest quality. Christ is depicted dying on the cross – not yet dead – and his head tilts down with a caring, almost paternal expression to the viewer below. 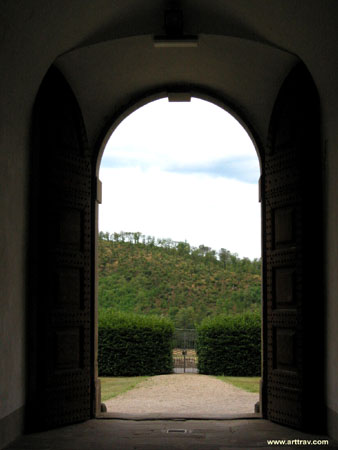 After this wonderful historical/spiritual experience, we felt it too crass to head straight for the outlet mall, so we stopped at the Medici Villa of Cafaggiolo on the way. This Medici villa, particularly favoured by Cosimo’s son Francesco, is on the road towards Barberino in Mugello, at a large curve. It is open to the public at a cost of 5 euros per ticket and is frankly not worth it. Now used mostly for wedding receptions, the spaces retain little of their original character. The building is best viewed from the outside; the inside might be of interest mainly to Medici family buffs. Interestingly, recent archaeologica research has pinpointed the exact location of the Cafaggiolo ceramics kiln in operation through part of the 16th century, but there is nothing left of it to visit today. Medici maiolica produced at Cafaggiolo is on display in some of the leading museums of the world, including the V+A in London.

Finally we finished our day at the Barberino outlet mall (august sales). The McArthur Glenn mall is set up like a renaissance town, with a mix of fake medieval and Renaissance type homes, set in the valley against the rolling hills of the area. It’s well arranged, with huge parking. Weekends here tend to get very full. This mall offers a mix of unattainably expensive brands like Gucci and lower end things like Benetton, Guess… as well as sports wear like Puma. There are also housewares stores including Frette and Lagostina. There is a pleasant bar at which to sit outside and have a snack or capuccino.

The return trip can be either by Autostrada or via the Bolognese. The highway often gets backed up between this exit and florence, and on weekends traffic from the outlet mall aggravates the situation. To return to florence via the smaller roads, follow the blue signs rather than the green autostrada signs. The only complext bit is leaving the mall. You are forced in one direction, and come to a large roundabout. Here it is NOT obvious how to get to florence. Take the roundabout almost the whole way around and you’ll find signs indicating “Passo della Futa” and Vaglia, which is the road you want. From here signs are to Vaglia and then to Florence. You will pass by the Medici villa Demidoff and park at Pratolino on the way home, which, if you’ve followed this whole itinerary, you’ll want to save for another moment.