A true piece of heaven for art lovers in Tuscany is the route one of my old and wonderful professors, Rab Hatfield, used to call the “Piero Pilgrimage“. On the tracks of the Renaissance artist Piero della Francesca, you start in Arezzo in Tuscany and in the end you cross the entire country, spend some time in the Marche and finish on the East coast in Rimini! This itinerary does not include the museums in Milan and Perugia, nor the Uffizi in Florence, all three of which house important works by Piero. Rather, the trip follows Piero’s path through works still found in-situ, or in their city of production in the case of Urbino.

Leaving Florence (or anywhere nearby), take the A1 highway to Arezzo. From Arezzo onwards take small roads – first follow signs for Borgo San Sepolcro. About half an hour outside of Arezzo, stop at Monterchi, then continue to Borgo. From Borgo, cross the mountains on a treacherous pass to Urbino (great views!). To top it off, follow the road to Pesaro, and take a few kilometres of autostrada for just one more fresco (and a cool church by Alberti) in Rimini. The way home (3.5 hours) is all autostrada. This is best done with an overnight stay on the east coast. There are plenty of other wonderful things to see in the area that are not covered in this trip dedicated to Piero.

A little bit about Piero della Francesca (circa 1412/20?-1492) is also de riguer here. Born in the town of Borgo San Sepolcro, Piero trained in Florence, probably in the workshop of Domenico Veneziano. Highly influenced by Masaccio, he can be classified as one of the foundational artists of the Renaissance. He was a skilled mathematician and the author of a treatise on scientific perspective and of other books on math. His style is highly linear and calculated, characterized by an infused calm that derives from a lack of motion.

Arezzo: Church of San Francesco, Fresco cycle of the Legend of the True Cross (circa 1460).

The high chapel of this church is decorated with a large fresco cycle commemorating the True Cross, and incorporating a little bit of local propoganda along the way. The story is narrated in ten fields that recount elements of the legend. The theme of the cross is also ingeniously incorporated visually into some of the scenes, for example the Annunciation (left altar wall) has a cross-shape built into the architecture, as does the tent shape to the right of this same wall.

This work makes a nice starting point for understanding Piero’s unique contribution to Renaissance painting. It is not the earliest work on the Piero trail, nor the latest, but it shows his mature style towards 1460. This style is characterized by obsession with perspective to the point of sacrificing movement, monumentality of form, repetition of elements, alternation and variation of colours and figures.

Tickets must be purchased in advance.

Arezzo, Duomo: Fresco of Saint Mary Magdalen. Located on a wall at the left side of the apse. 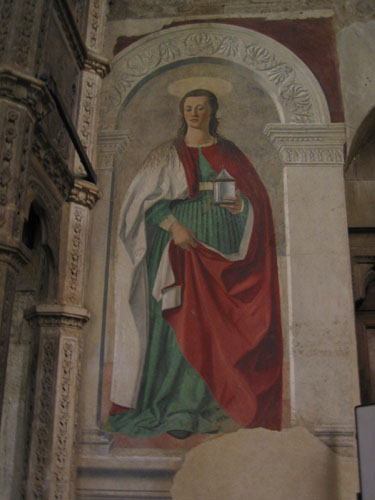 This fresco was probably executed while Piero was working on the nearby cycle mentioned above. Elements such as the figure’s clothing and facial type recall those seen in the Legend of the True Cross frescoes, such as the flipped over cape. The facial shape however is less rigorously oval and may point to a slightly later dating. The form and colour are typically Piero, monumental and clear. 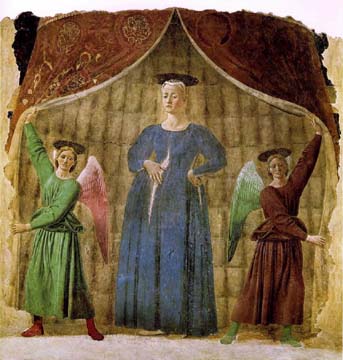 This deceptively simple fresco hides ingenious compositional tricks and levels of deep meaning. When this small, remote town moved the fresco (already detached over a century ago) to the schoolhouse from its previous location in a cemetary chapel outside of town, local women protested. The work has had a talismanic function for many centuries, due to its representation of the pregnant Virgin Mary. Back in the mid fifteenth-century, when it was painted by Piero (but we’re not sure where or when, exactly), women had a lot to pray for, since pregnancy and childbirth were very dangerous affairs.

Piero’s pregnant Madonna is approachable and human. She looks just about as uncomfortable as any woman would be about eight months along. She stands with her weight in a heavy contrapposto pose, leaning on one foot and holding her back. On the other hand, she is majestic and monumental. Her perfect oval face and eyes open just a slit betray a reassuring calmness. Moving outwards now, she stands in a tent whose rich pomegranite-patterned damask (heavily damaged) sides are being pulled back by two carbon-copy angels. The angels are the same figure, reversed, which gives the composition balance. Nonetheless, Piero introduces variety (another prized element in renaissance composition) by alternating the colours of their robes, wings and boots.

Within this monumental fresco, of which just this detached fragment remains, are the Christian themes of birth and resurrection. Mary is shown here as the container of, or tabarnacle of, Christ. The composition and subject matter hence refer to the miracle of transubstantiation, or the host, the central mystery of Christianity.

Borgo san Sepolcro (the town of the holy sepulchre) is Piero’s birth place, and he worked here too. The town hall houses a museum, but is also the original locaton of Piero’s fresco of the Resurrection. 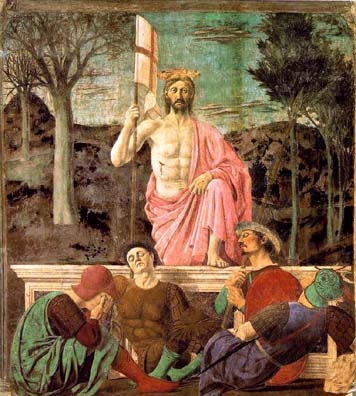 Resurrection (image from the Web Gallery of Art)
Although a religious subject, the topic is appropriate to a town named after the holy sepulchre. Piero here plays with perspective, showing us a scene in perfect perspective, with Christ who is entirely frontal and not shown within that perspectival scheme. This is a trick he got from Masaccio’s Trinity (SMN, Florence). 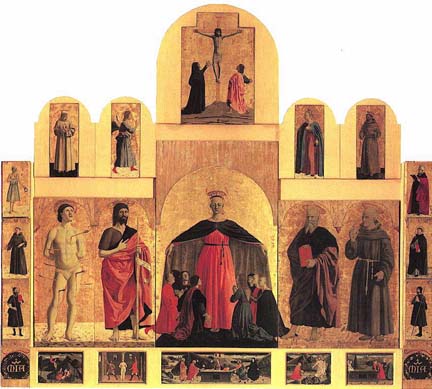 Madonna della Misericordia (image from the Web Gallery of Art)
This altarpiece (shown in a reconstructed state and missing its original frame) was made for a local confraternity, whose members are shown protected by the tent-shape of the Madonna’s robe. This is a very early work by Piero, which shows in the somewhat inept rendering of some of the figures. The use of a gold background was probably something Piero wouldn’t have liked, but perhaps was required by the patron. It didn’t allow him to work in perspective and to create realistic spaces.

This lovely Renaissance palace is entirely due to one man, the patron Federico da Montelfeltro, a powerful condottiere (mercenary soldier) and eventually Duke of Urbino. Besides being a good warrior, Federico was very proud of his humanist education. He learned Latin, astronomy, music, mathematics and all that good stuff. With the profits of warfare, Federico da Montefeltro built up a large court in Urbino to rival all others in Italy. From 1468 onwards, he invested more money in art and architecture than any other italian ruler.

The palace was begun in the 1450’s, and Federico had work done on it for the next 30 years. The architects involved were Maso di Bartolomeo, Luciano Laurana, and finally the Sienese Francesco di Giorgio.

The courtyard is a light and airy renaissance space, in brick and articulated in white local marble. The effect is graceful and sophisticated. All around this courtyard is a long inscription in latin that is practically a biography of the patron! In short form, it says something like: “Federico Duke of Urbino, Count of Montefeltro and Casteldurante, Gonfaloniere of the holy roman church and head of the italian confederation, started from scratch this building for his own glory and those of his ancestors. He, who has fought many wars, six times lead armies, eight times won against the enemy, winner of all wards, has increased his dominion. His justice, clemency, liberality, morality equal and ornament, during peace, his victories.” 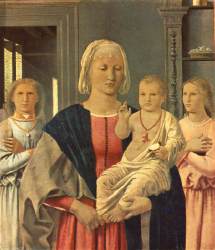 The palace is entirely visitable (no reservation required) and houses the National Gallery of the Marches. This Museum has two important, yet small-sized works, by Piero: The Flagellation and the Madonna di Senigallia.

The Madonna di Senigallia shows the influence Piero felt of Northern european artists in two main ways. First, northern artists used oil paint; here, piero mixed his tempera with a little oil (called “tempera grassa”, or fat tempera), which allowed him a longer drying time. Second, his delicate treatment of light reflects (pun!) northern usage; observe the reflections in the objects on the shelf at right, and the rendering of dust on sunlight streaming through the window at the left. 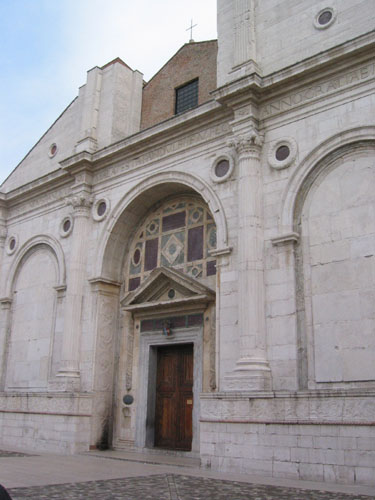 In the late 1440’s, the Lord of Rimini, Sigismondo Malatesta, started rennovating this Gothic church in Rimini. He had a builder from Verona, Matteo de’Pasti, get started on the inside, just rennovating one chapel. The project grew exponentially, and eventually he had Alberti on the project. In 1450 Alberti designed the marble encasing for the earlier structure, which is still visible on the side of the building and at the top of the unfinished facade. This expansive restoration project, which was never finished, involved putting a Renaissance marble “icing” on all internal and external features. On the outside, Alberti’s job was to regularize the Gothic structure, whose proportions he found disturbing. The front and sides show his obsession with mathematics and proportion, and his strong reliance on Classical precedents.

The chapels inside are decorated in low-relief sculptures by Agostino di Duccio and his workshop. 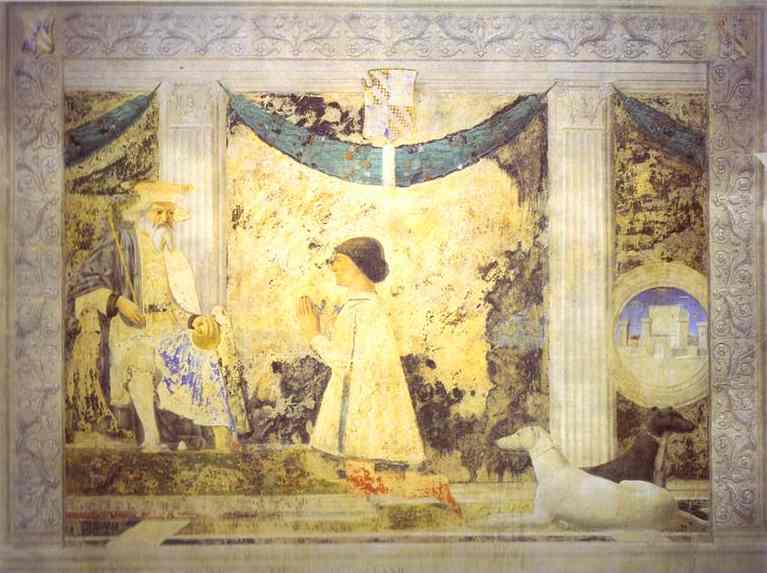 A detached fresco by Piero della Francesca (you were probably wondering how he fit in!) has been put on display in one of the chapels in the right aisle. It was originally located above the entrance to the sacristy. The fresco shows the patron, Sigismondo Malatesta, adoring Saint Sigismund. It was originally made for the entrance wall of the church’s sacristy. (It has now been moved into the last chapel on the right for easy access.) It is dated 1451, so is a relatively early work by Piero. The simple composition in accurate perspective and the lack of motion are characteristic. The architecture, with the white pilasters in the background, are clearly Albertian and a reference to the church in which the fresco is located.