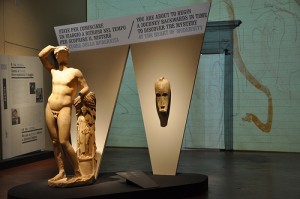 The exhibit Angry Young Men: Picasso, Mirò, Dalì, the Birth of Modernity is on now through July at Palazzo Strozzi in Florence and my full review of it is available in the latest issue of The Florentine. It starts like this:

Have you ever met someone famous when he or she was still young and unknown? That’s how I felt coming out of Palazzo Strozzi’s latest exhibit, Picasso, Miró, Dalí. Angry Young Men: the Birth of Modernity. With a cinematographic yet scholarly approach, curators Christoph Vitali and Eugenio Carmona lead us through the youthful works of these three Catalan artists who grappled with nineteenth-century artistic conventions and developed a new form of vision that was to shape the modern world. (And it continues like this…)

What I didn’t have space to write about there was the beautiful display – in true PS tradition. At the press conference I met the architect responsible for the design and mounting of these exhibitions, Carlo Pellegrini, and he pointed out a few elements that I hadn’t noticed.

It is apparent from the start that this show is laid out in a particular way, with the whole large first room given to text, a projection, and two sculptural works not by the artists in question. The rest is an undulating and luminous path in which 90 degree angles are not present. Signage is printed to look like a book (although the concept is intended to parallel a movie, not a book – is this a form of differentiated learning?) while individual “labels” have become large tombstone-like wedges below the works – at times a bit too invasive. The childrens’ signs that always accompany a selection of the pieces at Palazzo Strozzi are placed next to these wedges but are upside-down.

As there are not a lot of actual paintings in this show, the display is all the more protagonist. Display also guides our view in ways we often don’t realize. Like Brunelleschi who balanced architectural elements across the naves of churches, the sculptural forms of the temporary walls as well as the layout of the rooms themselves are used to direct our viewpoint to generate key comparisons between the artists across the whole display that complement those set up intentionally by the curator in each room. My photos below are focused on showing you the display rather than the works of art.

As I mentioned in the article, Palazzo Strozzi offers a really great range of collateral activities. There are concerts for free on Thursday nights in April (performed by youth orchestras), there’s a film series on the theme of identity, there are drawing lessons in the galleries… Many of these are free, though those in the gallery require an entry ticket, making it a fine idea to purchase an annual membership right now in order to take full advantage!

There’s one activity that is not in their printed pamphlets but is an official Palazzo Strozzi activity, and that is Slow Art 2011 which I am co hosting (as The Florentine) with friends at Palazzo Strozzi. Sign up for Slow Art Florence 2011 or read about it on this blog. It’s a replay of slow art 2010 at Santa Croce, it costs only 8 euros and the museum is throwing in a special gift and an English High Tea catered by my friend Paula… what a steal!!

Photos of the display