An Elegant Tribute to Grand Duke Ferdinando I de’ Medici

By Guest_Post on Jul 2, 2009 with 1 Comment
At last there is an exhibition in Florence dedicated to one of its most significant Medici rulers, Grand Duke Ferdinando I (1549-1609).  Celebrating the 400th anniversary of Ferdinando’s death and running from May 2nd to November 1st 2009 at the Museum of the Medici Chapels, this multimedia show documents the ephemeral art created for his spectacular political wedding to Christine of Lorraine and presents the history of one of his most important artistic commissions, a pietre dure (hard stone inlay) altar for the Cappella dei Principi (Chapel of the Princes).  Appealing to the Medici scholar and Medici novice alike, the exhibition beautifully pairs rarely seen artwork with engaging didactic material and provides insight into artistic production at Ferdinando’s court in Florence.

Most visitors to the Medici chapel come to see the famous tombs Michelangelo designed for two early sixteenth-century Medici dukes and skip over the opulent late Renaissance Cappella dei Principi begun under Ferdinando’s rule. Furthermore, when most people of think of the Medici, the fifteenth-century Cosimo de’ Medici or Lorenzo the Magnificent first come to mind.  Yet it was Ferdinando who physically transformed the urban space of Florence, completed the Uffizi gallery, and made Florence an economic and political center rivaling the other courts of Europe.  Born to Duke Cosimo de’ Medici, who resuscitated Medici rule in Florence in 1537, and the Spanish Princess Eleonora da Toledo, Ferdinando began his political career as a cardinal in Rome.  Then following his brother Grand Duke Francesco I’s sudden death in 1587 (some speculate it was Ferdinando’s doing), Ferdinando rose to power.  His first order of business after leaving the church was to marry a French princess in order to secure ties with France. 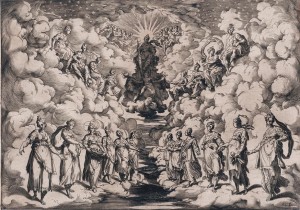 The first floor of the exhibition is devoted to his wedding to this French princess, Christine of Lorraine, and is located just past the ticket booth literally on top of the tombs of Ferdinando’s relatives (which were recently exhumed for forensic analysis).  This space brings together a fine collection of engravings that record the many events that transpired for the 1589 event, such as parties and performances (fig. 1) in the Pitti Palace courtyard, a masquerade in front of the Pitti, and parade floats for the procession. 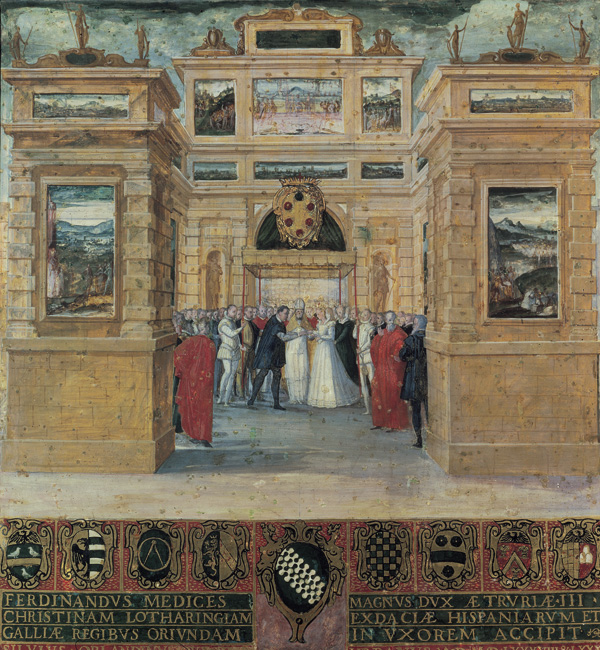 This crypt space also includes portraits of the new Duke and Duchess and an intimate painting (a Tavoletta di Biccherna or archival document cover) attributed to the artist Cristofano Rustici, conserved today in the Archivio di Stato of Siena (fig. 2). The panel painting acts as a visual marriage contract between Ferdinando and Christine; its small scale allows the viewer to feel as if he or she is one of their witnesses. 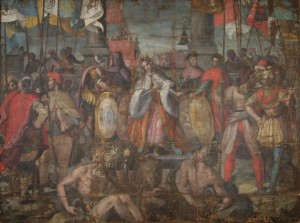 The exhibition continues upstairs in the grand Capella dei Principi which is currently partially under restoration. The exhibition functions to mask the scaffolding and to display a group of enormous scale paintings created for Christine’s procession into Florence as a new bride.  These paintings, generally hidden in deposito (storage) and not seen often by the public, were created quickly for this one event by second rate Medici court artists and were likely left outdoors for a period.  They are therefore not in great condition.  Yet what they lack in physical brilliance, they possess in bombastic propaganda due to their sheer size and subject matter: allegorical renderings of glorious Florence (fig. 3) and large-scale images of the Duke and Duchess in their finery.  Exhibited at the height they might have been seen on the street and in one case, in a frame like the archway that would have exhibited them, they provide the visitor with a sense of what it was like to have seen these paintings on the streets of Florence in the 1589 procession.  More engravings and drawings documenting the entry as well as festival books that described the wedding are displayed alongside the paintings to provide further context. 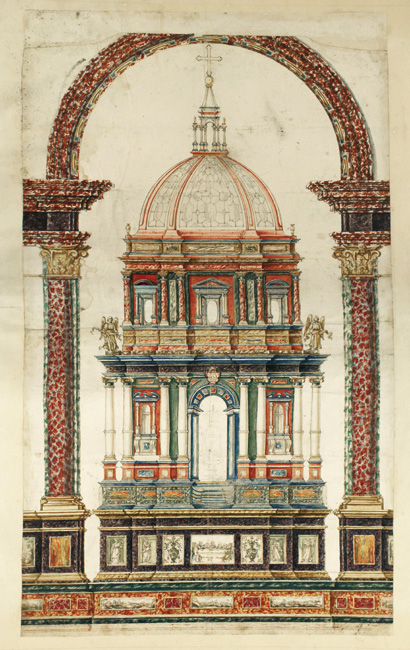 The other main attraction of the exhibition is the pietre dure altar in the chapel  (fig. 4). Preparatory drawings, documents and pietre dure inlay pieces tell the story of its construction and provide information about Ferdinando’s famed pietre dure patronage.  At the end of the exhibition the visitor is asked to share his or her opinion in the form of a written survey about whether the unfinished altar should finally be completed as planned or if it should be left the way it is.  This art historian in far away New York looks forward to hearing what the people decide on the matter and is happy to be able to relive this exhibition at home thanks to the fine catalogue that was produced for it (sadly not available on amazon).

Small exhibitions that bring rare works out of storage and question the status of Renaissance objects are rare in these days of blockbuster museum exhibitions. Hopefully Florence will continue with this scholarly approach.