Pollock in the Palazzo

What do Jackson Pollock and Michelangelo have in common? For the first time in Florence, an exhibition is dedicated not just to the great modern American artist, but to his fascination with the great High Rensaissance painter Michelangelo. A mentorship for which there are few, but convincing, visual documents and a handful of citations, which curator Sergio Risaliti has captured over the years, and put together now in honour of the celebrations for the 450th anniversary of Michelangelo’s death. Containing 16 works by the modern master, the exhibition “Jackson Pollock. La Figura della Furia” is on until July 27, 2014.

To be honest, a big deal has been made of a rather small exhibition that occupies two small spaces inside Palazzo Vecchio, and the excitement can only be understood within a political framework. Opening up Florence’s historic seat of government to Modern and Contemporary art is something initiated by the Renzi administration when he was mayor, and this exhibition was encouraged by him, although now he is premier and the initiative has been continued by the regent mayor Dario Nardella. Indeed, Palazzo Vecchio has become a place that frequently welcomes citizens and guests to events and exhibitions, representing a greater openness than the previous administration. Opening Palazzo Vecchio to modern and contemporary art has to be understood also as a response to a long-term complaint that the city has been stagnant since the Renaissance due to the unsurmountable pressure of the perfection of Michelangelo. Thus looking at one modern artist’s response to the perfection of the master is a kind of statement: our artistic history is not a weight but a challenge.

To the casual viewer, the answer to the question “What do Jackson Pollock and Michelangelo have in common?” is not going to become evident from visiting this exhibition. The connections are very interesting, but they are rendered clearer if you have the opportunity to hear the curator, Sergio Risaliti, speak, or failing that, to read the catalogue (in Italian). For this reason I’ve attempted to break some of it down here.

Pollock is best known for his drip or action paintings, so it is surprising to see a figurative sketchbook by the young artist, conserved at the Metropolitan Museum of Art, in which he was studying the European masters, and that shows clear admiration for Michelangelo. In a letter of January 1930, Pollock complained that he could not draw, and soon after set out to resolve this problem. In these precious notebooks – Sketchbooks I and II (dated to the 1930s)– Pollock was very impressed with the images of the vault of the Sistine Chapel and the Last Judgement.  We can indeed make out at least three ignudi in addition to Jonah, Adam receiving the spirit of life, and several figures from the Judgement.  Pollock become acquainted with these masterpieces of the Italian Renaissance during his studies under Thomas Hart Benton in courses at the Art Students League of Manhattan from 1930 to 1932. 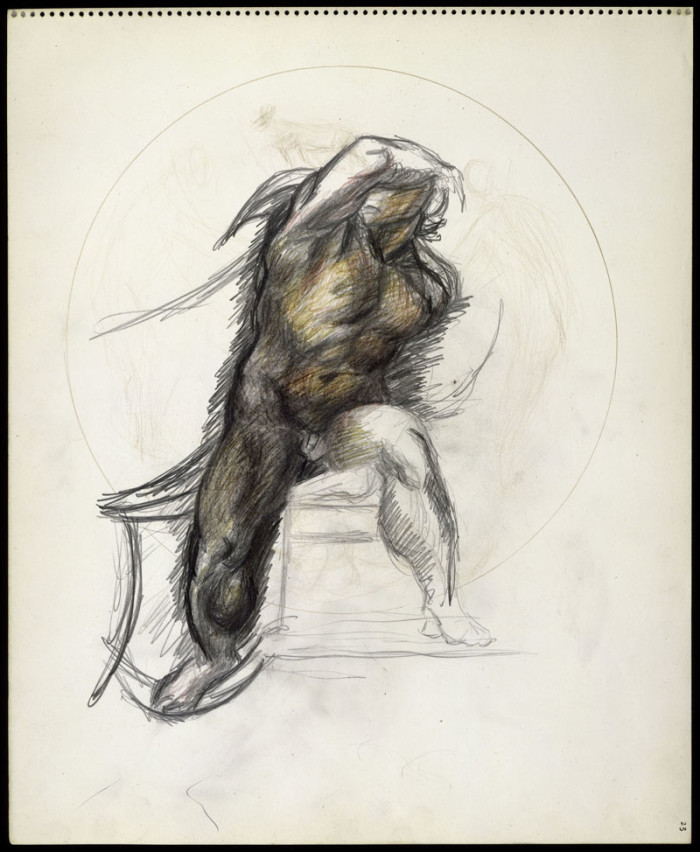 Pollock went beyond the exercise of making academic copies of the masterpieces of Renaissance art but rather studied anatomy and musculature in order to express sentiments of sweetness and grace, as well as tension and power, suggested by the recesses and projections of the human body. In so doing, he tackled the dynamic and expressive representation of anatomies, of full and empty, of the areas of relaxation and maximum tension of the muscles and of the flesh. It is here that we can grasp the bases of Pollock’s abstract compositions; here the artist is searching for his language, which will lead him beyond the European figurative tradition. Tradition remained inescapable, in any event, even after his deliberate abandonment, as artist Lee Krasner and Pollock’s companion states: “Many of his most abstract paintings started with a more or less recognizable iconography – heads, parts of bodies, fantasy creatures. I once asked Jackson why he didn’t stop painting his works as soon as a given image had taken shape. He answered: The figures are what I want to cover up”.

Pollock photographed in 1947 by Wilfred Zogbaum

Both Michelangelo and Pollock’s working methods were unusual and uncomfortable. Pollock’s act of removing the canvas from the easel or wall and placing it on the ground broke completely from tradition. He is often represented working in a crouched, downward-oriented position and you can just imagine his knee and back pain from this. 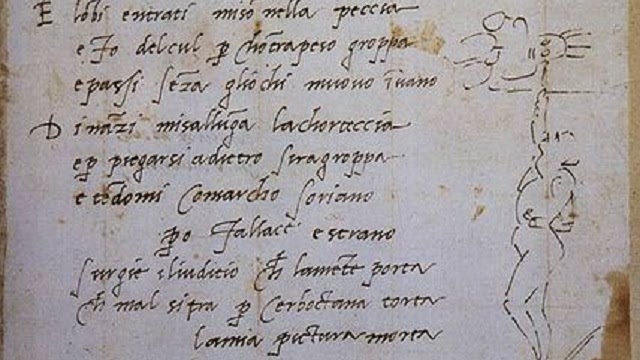 Michelangelo, sonnett and sketch of 1508

This easily reminds Renaissance scholars of a famous lament of Michelangelo’s while he was working on the Sistine Chapel. Here, the artist spent years painting upwards, dealing with pain in his back and paint dripping on his face, which he illustrated in a sketch alongside a sonnet in 1508. “My beard to heaven. My chest bent like a harp. The dripping brush making a rich pavement of my face. My loins have been shoved into my guts, my butt is ballast.”

The point of similitude between the two great artists manifests itself in the creative act and outcome. The yearning to create, the irrepressible impulse of the creative act that assumes a mystical value in the never satisfied search for beauty as the absolute and of the infinite as the limit and purpose of the act of making art. For Michelangelo it was the manifestation of God for which the desired perfection remains an unattainable goal. On the other hand, Pollock attempted to attain his idea of harmonious totality by leaving it up to his unconscious to generate something perfect and infinite: Pollock indeed starts out from the perception of an image, but he breaks it up completely, thus giving it up to its infinite possibilities of evolution, reading and interpretation.

The hunch that there is a connection between the two artists is one that a few scholars as well as friends of Pollock’s have observed over time, and the curators and contributors to this exhibition have pulled together these revealing quotes.

Christina Acidini found a reference in a 1975 lecture by Eugenio Battisti who said that Pollock was “the most Michelangeloesque master of all,” with particular reference to the violent anatomy of Michelangelo which might be seen in the modern master’s performance movements.

Sergio Risaliti found a quote from Morton Feldman, who was a good friend of Pollock’s as well as an important composer, who said that Pollock paralleled his work to the drawings of Michelangelo, as well as to the ritual sand drawings of American Indians.

The connections are casual and occasional, though fleshed out better in the catalogue, which also explains some of the philosophy that influenced Pollock. The exhibition, in truth, proposes connections and asks questions. It cannot provide definite answers. But it certainly brings up a challenging comparison, and dares to present it, unfinished, to the public. 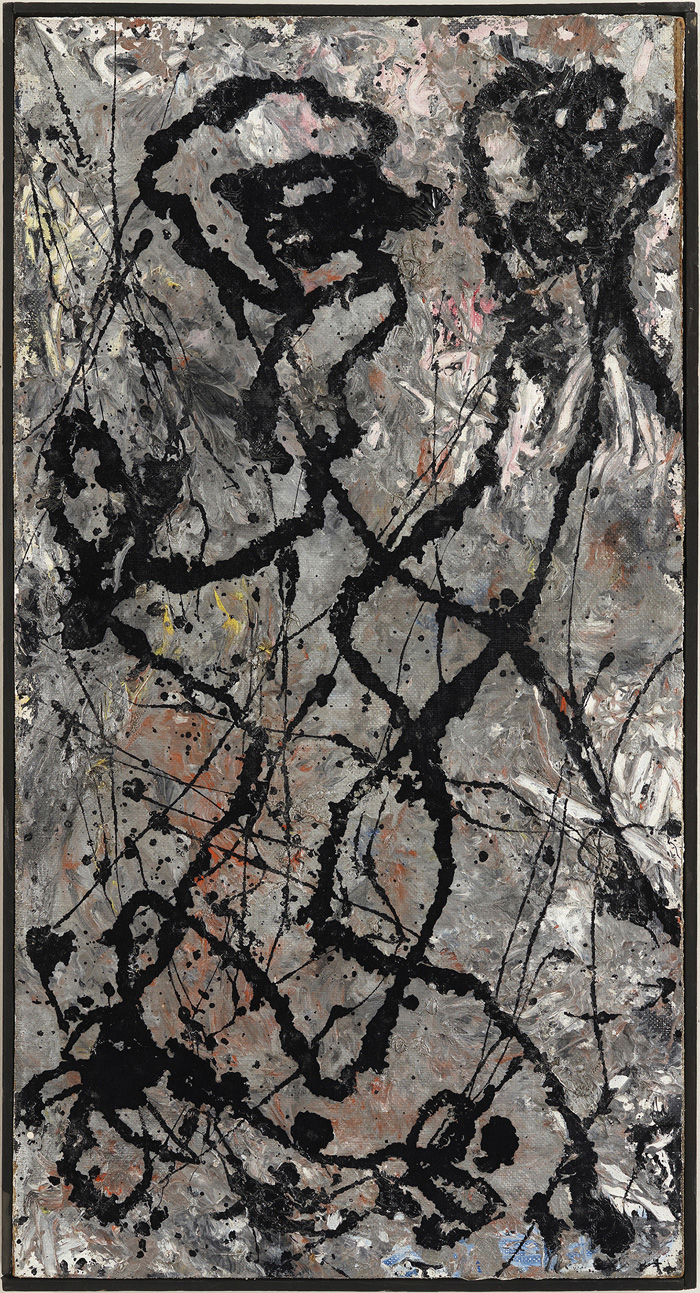 Jackson Pollock ,Composition with Black Pouring, 1947, The Olnick Spanu Collection, © Jackson Pollock, by SIAE 2014 [He kept this work in his studio.]